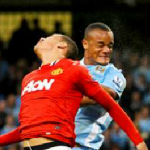 So it’s the morning after the night before. A night full of disappointment…of epic proportions. During most of the game I had that numb feeling and it’s the same this morning. Just feel ‘empty’. It began when I heard the team selection. I understand the arguments for picking that starting line up, but it signalled we were going to be happy scrapping for a draw, or hoping for a lucky breakaway goal to snatch a win. Many pundits were likening the selection and formation to the way we play in Europe. Enough said, considering our woeful displays this season. It may be criticised as being tactically naive but I always prefer it when we pick an attacking team, signalling our intent. Like when we beat City, at The Etihad, in the F. A. Cup, earlier this season. We started with Rooney, Welbeck, Valencia and Nani and went for the jugular. We stormed to a 3-0 half time lead and hung on in the second half to win 3-2. I can’t understand why Valencia was on the bench considering his recent displays. Rooney was isolated and frustrated as the lone striker and we hardly troubled Joe Hart in the full ninety minutes.

In truth, United haven’t been good enough this season. Not by their own high standards. It’s clear to see we need to make some quality acquisitions this summer. We’ve managed to somehow scratch ourselves to the top of league and that’s of great credit to Sir Alex and the players, but United fans have been uneasy about many of the performances this season. If we’re to compete on all fronts next season, changes need to be made.

So we’ve handed the advantage back to City. Our only real hope now is that the Geordies do us a favour on Sunday. We’ll know whether they have by the time United kick off against Swansea. It’s not over yet, but it’s in City’s hands now. We’ve got to hope that they carry on their tradition of shooting themselves in the foot right at the crucial moment.

Just two games to go. Are there going to be more twists and turns? We can only hope so.