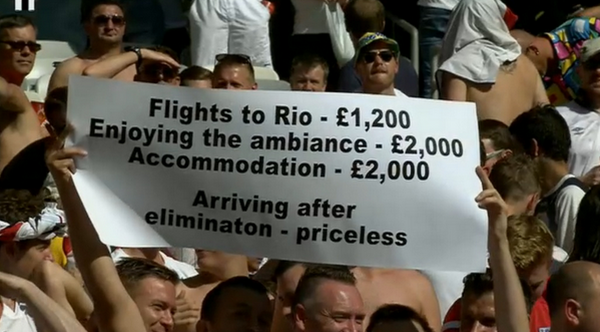 You can rely on the England fans to raise a smile despite the national team’s dismal performances. This banner summed it up nicely and brings home just how much England’s loyal followers spent to follow their team. The players gathered to applaud the fans at the final whistle and I’d like to think they appreciate the sacrifices some fans make to follow and support them.

England fans gave the hapless team great support throughout the final group game against Costa Rica, despite already being knocked out of the competition and with little to cheer about the performance on the pitch.

I was even more depressed by England’s display today. Costa Rica were playing like it was a friendly and we didn’t really trouble them. Okay, Sturridge missed a few chances but overall the performance didn’t promise any significant hope of future improvement. I hope I’m wrong, but for me, this World Cup marks a real low as an England fan.

So, I applaud the fans for their unwavering support and only wished some of the players showed such commitment.