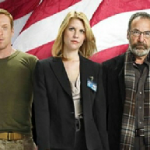 I’m gonna miss ‘Homeland’. It’s become something of a Sunday night ritual over the last few weeks; settling down to get my weekly fix of this absorbing drama. It’s been a hugely enjoyable series and last night was the final episode of Season One. I’ll not go into detail about how it ends in case someone reading this hasn’t seen the last episode. Suffice to say, it lived up to the high standards set by previous episodes. It was full of tension, kept you thinking, threw in a few surprises and left you wishing Season Two was starting next week.

The performances of Damian Lewis (Brody) and Clare Danes (Carrie) were particularly impressive throughout the whole series. I liked how they played strong characters suffering personal fragilities. The producers paced the storytelling just right; using the various twists and turns to great effect. Plus, they set up Season Two in such an imaginative way. All in all, another great US produced TV series and one I’m going to miss. No more Sunday night ‘Homeland’. This means I’m going to have to invest in some DVD box sets of other great TV series to fill the gap. Thanks to the excellent standard of TV drama coming out of the US, I have plenty to choose from.