It was a normal day in the office. There were stories on the news reporting rumours that Sir Alex Ferguson was to retire. Most commentators seemed to think it unlikely, but then it was announced, the news all United fans dreaded was finally confirmed; Sir Alex Ferguson is to retire at the end of the season. Anyone who doesn’t love football or United will not understand the feelings that announcement has provoked. 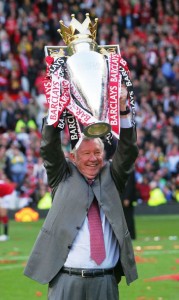 I’m shocked, but not surprised. I suppose it makes sense when you look at it in the cold light of day. Sir Alex has just regained the Premier League title from their City rivals and can leave on a high. He is 71 years old and set to undergo hip surgery in the summer. I have a feeling that the United board would prefer the new manager to be Jose Mourinho and they may need to act fast before he rejoins Chelsea.

Obviously the media is now dominated by the news. I’ve just listened to a montage of radio commentaries from some of United’s most famous triumphs during the Fergie years and it gave me goose-bumps. What memories Sir Alex Ferguson’s time at United have given me and millions of United fans around the world.

I’ve supported United for over 40 years and can remember the barren years before Fergie took charge. The last 26 years have produced unrivalled success and as a United fan I’d just like to express my thanks to Sir Alex for transforming the Club and giving me some fantastic memories over the years.

End of an era.